6 Popular Games You Can Win Thanks To Math 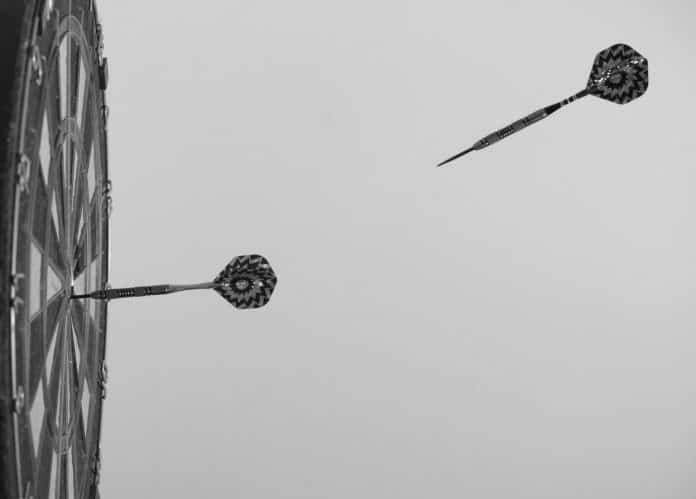 We needed this guide growing up. Things would have been so different for us. Heck, we could have been president! Okay, that’s a stretch but these miniature tutorials will definitely come in handy next time you find yourself playing one of the games.

One of the best games at any bar is darts. While it may be one of the best, it is surely not the easiest. Luckily, there are some helpful hints for people to maximize their dart talent, including this scientific paper on the subject written by a statistician about how to maximize your darts-related efforts (and the mathematical reasoning behind the strategies).

Essentially, mathematicians ran some simulations of dart games where the player’s skill level was assigned a value. When they plugged in the numbers, the graph of the best place to aim according to your skill level is on the lower part of the board between numbers 16, 19, and 17.

So, the next time you’re out with your friends and there is a dart board, challenge the theory and aim lower left and then slowly make your move towards the bulls-eye. If you really want to excel, you can read the 15-page paper where it explains how to create your own personal algorithm to be the best dart player you can be. But it’s written by someone who probably doesn’t go to very many bars more of a library sort of person.

We all remember this game—and the intensity that came with it. And of course, we will never forget the sound of the insane buzzing as we failed our mission and lost our patient. RIP.

Most likely the game would only last a week or two because we’d lose all the miniature pieces as we flailed our hands up in shocking defeat. But now there is help. Tom Whipple is a science journalist and author of the book How to Win Games and Beat People: Defeat and Demolish Your Family and Friends! and he has some sound advice for Operation, which he got by asking an actual surgeon.

In his book, Whipple says that it’s all about how you hold the device, “First, grip it with your thumb and ring finger, not your forefinger like a pen (although for extra support, you can use your the other hand). Second, bring your arms close to your body. Wedge your elbows into your sides – that keeps tremors in check. Third, stand up and spread your feet.”

Now you can be the best surgeon in town. Good luck!

One of the most classic road trip games of all time (or for any instance when you and someone else are bored). Usually it’s a back and forth of guessing the most common letters and figuring out what random word your competitor chose, but there is actually a theory to win.

Data Genetics has a website that helps with technique on Hangman, or you just can follow Jon McLoone’s advice on the game. McLoone explains that the best words are not long ones, because choosing longer words actually makes them easier to guess. Why? They have plenty of vowels which everyone goes to first.

The way to win is by using smaller words with the maximum number of the least common letters, things like Z, X, Q, and J. The result of the best word to use in hangman? JAZZ. By the way, that’s the result of McLoone running an algorithm over 90,000 words, so you can trust him.

So, while you may find the perfect answer for one game, be mindful on game two. No one wants to play with someone if they just lose all the time.

What was better than having to kill time at the dentist and seeing a stack of Where’s Waldo? books? We don’t recommend using this system all the time since it would defeat the purpose of searching for the only other dude who is famous for his horizontal striped sweater. (Freddy Krueger is the other one.)

Mathematician Ben Blatt discovered there are patterns to find Waldo, who is usually hidden in one of two narrow bands across the top or bottom halves of the page. The reason Waldo is usually in those small sections is because our eyes usually go around the perimeter of the page and then directly to the center.

Building on Blatt’s studies, data scientist Randal Olson created an algorithm based on Blatt’s data that would calculate the optimal search path for finding the guy. The line of sight essentially makes your eyes go from bottom left of the page and then slightly up until you plateau, move forward, then back down, like scanning an upside-down bowl.

Good luck using this trick to look cool in front of your nieces or nephews.

Another childhood game that is just as fun as an adult. And unless you’re an amazing basketball player, then you need to know another strategy that Ben Blatt discovered; this one even had the Wall Street Journal writing about it.

His explanations go deep into the world of math and physics and numbers beyond normal comprehension, but thankfully for those of us less gifted in those areas, Cracked broke it down for us:“No matter your skill level, your mission is to maximize your opponents’ failures. If you’re the best player on the court, the best tactic is to make shots that, while not too easy, are still below your ability — playing it safe. This might draw the game out, but given enough time, your opponents’ misses will outnumber yours.”

Now if you’re the less skilled player and you see your friend making shots with ease, don’t try to beat him at his own game; instead, try for the crazy shots that you’re both risking. This will give you a better shot at winning against someone who is more talented than you at basketball.

The game that settled every decision since we knew what it was. And now, there is a method to the madness. Keep this one close to your heart because it could come in handy next time you’re arguing over who gets to sit in the front seat.

In this article for Fatherly, Tom Whipple (the guy who wrote the book on beating games) explains what to do in order to increase your chances of winning: “Only the initial throw in RPS is pure chance; after that, psychology enters the equation. First thing to keep in mind: Scissors are only played about 30 percent of the time. So if you want to immediately increase your odds throw Paper. From there, you need to factor in irrational human behavior.”

Whipple goes on to break down the mysteries of “chance,” by saying people subconsciously replay a winning weapon. So, if they beat you with rock, they’re more likely to use the rock again.

If someone loses, they’re more likely to throw something that would beat the thing they lost to. If they lost with paper, they’ll probably throw scissors next, and so forth. Use this wisdom with caution; it’s like using magic.