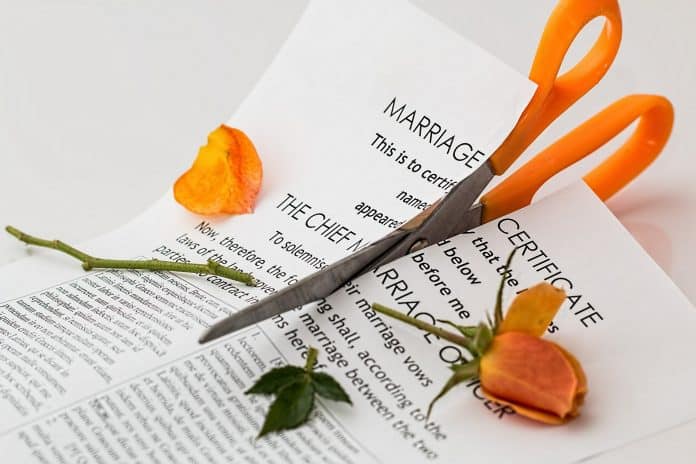 Every relationship has problems. Marriage can sometimes add another layer of stress to those initial issues and create some of its own. If you find that you are experiencing one or more of these issues in your marriage, it may be time to start thinking seriously about other options.

1. You can’t express yourself openly.

Relationships should be safe zones. You should be able to express yourself freely without any hint of hesitation. If you find that you are not comfortable being vulnerable in front of your spouse for any reason, then something is wrong. No one should be made to feel inferior or guilty about the truth of who they are, and if you can’t confess your vulnerabilities openly to your spouse, then why are you together?

“When you share your struggles and difficulties you not only strengthen your bond through your vulnerability but you also set the precedence for an open and nonjudgmental relationship for the future,” says life coach Dana Peters. If you find yourself confiding in someone other than your spouse, it may be time to think about why that is and what you should do about it.

2. There is tension between your families.

It’s not just a joke that wives tend to have issues with their mothers-in-law and husbands with their fathers-in-law. In many cases this stereotype is true. Most men grow up having our mothers help us and take care of us. Our moms know who we are and who we have been, the ups and downs, everything.

So when a woman enters the picture and becomes a man’s wife, there’s almost a competition between wife and mom (in their eyes), with underlying judgement on both sides.

“This tug-of-war between a mother and daughter-in-law is an age-old phenomenon, the stuff of sitcom jokes and Greek tragedy,” writes Ayelet Waldman in this article, which dives deep into the root cause of this dilemma.

Often it’s the same way for a man and his father-in-law—an unspoken battle to see who is the strongest man, who knows best, etc. In most cases these issues are minor and don’t have a significant impact on the marriage. But if you find yourself constantly battling with your spouse and their family of origin as a single unit, it may be time to realize that you’re never going to come first.

Have you ever been so frustrated with someone that anything they do is just icing on the annoying cake, like something’s bubbling below the surface just waiting to explode?

That may sound extreme, but it can happen, especially with the spouse you spend so much time with. You may just need a break and some time to yourself to hit the reset button, but if you find this feeling is common in your marriage, it might be something bigger.

Erika Fay, transformational coach and licensed marriage and family therapist, says that frequently criticizing your partner can make them feel like you’re attacking their character—the very essence of who they are. It’s understandable that this would cause significant rifts in a marriage over time.

Be mindful of your comments and negativity. And ask yourself if it’s your spouse causing your behavior or if you are irrationally directing this behavior at your spouse.

Money is the root of all evil, right? Well it is if you are lying about it. We all have moments of weakness where we give in to our tendencies and splurge on Amazon. The box arrives and we are filled with joy until our spouse leans over and asks, “How much did you spend on that?”

Of course that is the small end of this problem, whereas the larger discrepancies can come with serious issues like debt, bankruptcy, foreclosure, and also addiction (not just to illegal things, but to gambling, shopping, anything where money is involved).

Life coach Dana Peters assesses the situation this way: “If you lie about finances, you’re jeopardizing the relationship and the trust between you and your partner. It may be a difficult conversation to have but being transparent about your financial situation may help you avoid smaller arguments based off a misunderstanding about each other’s financial situations.”

If the foundation keeps getting shattered by lies about your finances, there may not be anything left to hold up the remainder of the marriage.

Thoughts on having kids should be discussed as soon as a couple starts getting serious. Things do change, however, and people can sway one direction or the other. But rarely will people change their mind about such a large decision. The worst thing to do is either lie about how you feel or hold out hope that the other person will come around to your way of thinking.

Some friends of ours had been together since they were in college, got married a couple of years ago, and then recently got divorced. It was amicable, but ultimately the decision came down to how they got along and whether they both saw kids in their future.

The tension fed into everyday arguments, and as time went on and they got older, they realized nothing was going to change. So instead of continuing on this path (and risking ending up in a not-so-amicable situation), they split up and still remain friends.

Having kids is not often something you wake up one day and change your mind about, so if it’s an ongoing issue in your marriage now, you might need to think about the effect it could have on your future together.

6. If You’re Thinking About Other People

It is common to sometimes fantasize, especially if you’ve been in a relationship for many years. Hopefully it is not an everyday thing, or you may have more to worry about. If you find yourself moving toward acting on any of these thoughts or fantasies, then it is definitely time to have a discussion and see if you’re in the right relationship. Because what is worse than just a fantasy is turning those thoughts into a reality.

In this Bustle article, certified health coach Isadora Baum writes, “If you’re fantasizing about being with other people or checking other people [out] regularly, it could mean you’re not happy in your relationship and your marriage might need to end in order to make room for a new life with a different partner.”

Although it’s not always that simple, this is certainly nothing to take lightly. It’s best to get ahead of the thoughts before someone gets truly hurt or lies become a regular occurence.

Romance is a key element in any relationship. If you watch any dramatic film that tells the story of the downfall of a marriage, the lack of romance is usually a key component. Maybe it’s the loss of attraction or falling out of love, but if there is no romance, it is a surefire way to tell things are in trouble.

As Baum explains in this article, “Things get busy, so not having a romantic life like you used to when first dating or early on in marriage is pretty normal for couples, with time.

“Yet, if your romantic life is zero, and it’s mostly because you’re no longer attracted to your spouse or interested in having [a physical relationship] with him or her (or are maybe even fantasizing about sex with another person), it could be a clear predictor of divorce.”