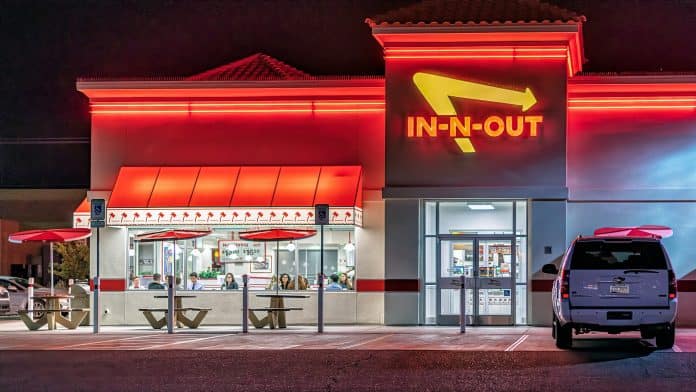 We all love In-N-Out, but unless you live by one of the 325 locations and go frequently, then you may not know the endless possibilities that await you as you race by the famous red, and yellow design. To the plain eye, it looks like a simple menu, but to a trained customer, the opportunities are endless. So, read closely and take notes because your next In-N-Out experience should be 100 percent customized, otherwise you’re not living up to the full potential of one of America’s finest fast-food institutions.

In-N-Out is one of the most beloved fast food chains in the United States. Business Insider has listed it the No. 1 fast food chain in America grossing over $807 million in 2016 with just over 325 locations. They only offer five menu items (not including the secret menu) and have so since they began in 1948.

One reason people love In-N-Out so much is the quality and the fact that their ingredients are natural and preservative-free, which is also the reason why the farthest away you’ll find an In-N-Out from California is just 300 miles away: they don’t want anything shipped and it must always be fresh. And that is how it has always been.

In-N-Out was founded in Baldwin Park, California, in 1948 by Harry Snyder and his wife, Esther, and has always remained in the family. Today, the current owner is Harry and Esther’s only grandchild, Lynsi Snyder. Harry came up with the idea with his wife by starting one of the very first drive-through fast food-restaurants after the end of World War II. They created the first drive through speaker in their first 10-square-foot location. The idea took off. Shortly after, the Snyders began opening more locations, while making sure quality was always their main concern.

Now that you’ve been briefed on the public information of numbers and history, it is time to hear some of their lesser-known secrets that really make In-N-Out a unique and fun experience.

We all know In-N-Out has a serious secret menu (that is not actually super secret), but there are still some items on there you may not know about, especially if you’re visiting and don’t get to have In-N-Out whenever you want. To prepare you for that next visit, here is a list of some of the most noteworthy secrets of the In-N-Out lesser-known menu items we found after doing some extensive research:

The 4X4: You know the Double-Double already on the menu. This is two of those put together.

Grilled Cheese: For the vegetarians of the world, In-N-Out does offer a grilled cheese and yes, you can get it Animal Style.

Neapolitan Shake: For when you can’t decide between chocolate, strawberry, or vanilla, get all three in one shake.

Chopped Chilies: In-N-Out always gives you those mini highlighter-yellow-colored peppers that are delicious, but when you try to tear them apart things get really messy. Good news: You can for them chopped and save yourself time from having to wash your hands for 20 minutes to get the pepper small off them.

Well Done Fries: You can order your fries well done so they aren’t their famous halfway cooked sogginess.

Protein Style: Instead of bread, you can get two pieces of lettuce on any type of burger.

Mustard-Grilled Buns: For that extra flavor kick, they’ll spread mustard on the buns before grilling them.

Doggy Style: Protein grilled cheese, Animal Style, with fries inside the sandwich. It’s basically a lettuce cup filled with fries and cheese and sauces and everything good—except meat.

Chili Cheese Fries: This is a rumored menu item that can’t quite be confirmed (yet). Try it out and let us know!

There are some other secrets about In-N-Out that a former manager explained during a Reddit AMA.

The best burger this employee ever had was a double-single, topped with diced chilies, onions, tomatoes, and a mustard bun. It is not on the menu and uses the customization of their secret menu.

While customers may never be able to order In-N-Out tacos, during the AMA the In-N-Out employee said that one employee would bring in their own taco shells and use the grilled beef, along with fresh salsa from diced tomatoes and chilies, then top it with the Animal Style sauce. It’s almost worth ordering all the supplies and going back home with your own taco shells to try!

That may be the tagline for Wendy’s but In-N-Out abides by the policy too. That is why when In-N-Out opened in Texas, they had to create a new meat producing facility since they would never ship their product by freezing it. It always has to be fresh—never frozen.

Only Two Groups of People Get Free Food

Those people are employees and police officers in uniform. Employees get one free meal per shift—anything up to a Double-Double (and nothing Animal Style). As for police officers, they’re the only other ones who get free food. Don’t even try it if you aren’t in one of these two groups; employees can’t even give out discounts. But hey, the food is already so reasonably priced, we can accept it.

Employees are instructed to give out one napkin per burger and fry and to place them on top of the food since the spread is messy and they don’t want it going everywhere. But that can then make your napkins messy, so you should ask for more napkins on the side if you need to.

The Redditor explained that the uniforms can be incredibly uncomfortable, especially if you’re working outside and assisting the drive-thru when it’s almost 100 degrees out. The pants are really hot and stiff and the hats become a pain because girls have to put their hair in a ponytail and pin the hat into their hair to keep it from falling down all the time.

Burgers, fries, and shakes served with a smile.

Employees are not allowed to make anything larger than a 4X4 because it’s too hard to wrap.

There is a reason that In-N-Out looks so good when photographed. Employees are told how important presentation is. That is why you’ll always see food perfectly organized and never sloppy. While taking pictures of your food for Instagram wasn’t a thing until recently, it’s always been a prideful thing with In-N-Out and they hold that value still. That is also the reason why you may have to make two trips to the counter to get all your since they won’t pile everything on because that would ruin the look of it all.

Previous articleThe United States Of Spanking: Why We Treasure Hitting Children
Next articleHow To Have Meaningful Conversations With Anyone And Everyone