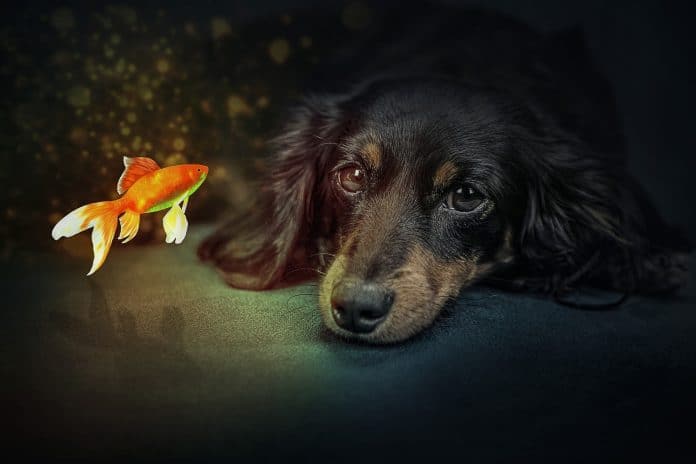 An interspecies kiss posted on Reddit enthralled the internet. Anyone who’s seen their share of nature documentaries knows that animals can be vicious to each other, so seeing an innocent smooch between a goldfish and a dog reassures us that the world can be kind at times.

We tend to anthropomorphize animals in these situations and think that these are best buds. What is more likely is that the dog was sniffing out a strange new creature and the goldfish thought the dog’s nose was something to eat. Regardless, it’s an adorable and hilarious picture.

Of course this photo couldn’t circulate for too long without a Photoshop battle starting over it. Reddit holds contests in which any user can submit a digitally altered version of a given photograph. The results are endlessly entertaining. Here are some of our favorites from the infamous dog and goldfish smooch.

This fish-bride and dog-groom make up for their creepiness with their tender affection for one another. This Photoshopper gets extra points for having to create extra body parts for the animal people.

We’ve all seen the tender photos of a soldier leaning out of a train window to give his beloved one last kiss as he heads off to war. This absurd twist on that theme shows our sweet pupper with his duffel bag and soldier’s hat. Our lovely goldfish has apparently jumped out of the pond to give one last smooch.

No Room on the Lifeboat

This sad reenactment of the sinking of the Titanic shows the puppy on a piece of flotsam with his beloved goldfish turning blue. We guess the frigid Atlantic is too cold for her species. Also, she’s probably not a saltwater fish, so we’re assuming that’s no good either.

Oldest Trick in the Book

You never know what tricks an animal will have up its sleeve. That’s why you don’t go sticking your nose in unfamiliar places. We like to think that there was a happy ending to this scene, in which the puppy survived and learned a valuable lesson. Maybe we’re taking this a bit too seriously.

Here is the other outcome that could’ve happened had these two animals not been so tenderhearted. Fortunately, in real life the two decided to lock lips and be buds.

The list wouldn’t be complete without our love birds (or love dog and love fish) on the Jumbotron. We give this entry an A for creativity even if it didn’t take quite the ‘shopping skills of the others.

This is another perennial favorite of Reddit Photoshoppers. We give it high marks for creating the illusion that the dog’s body is slowly obscured by water.

Goldfish and the Tramp

We’re not sure why they didn’t replace the tramp with our new favorite puppy, but we still love the idea of this one. The fish’s kissy face is also perfect for a spaghetti slurp. Nice job, Reddit, you’ve kept us entertained again!