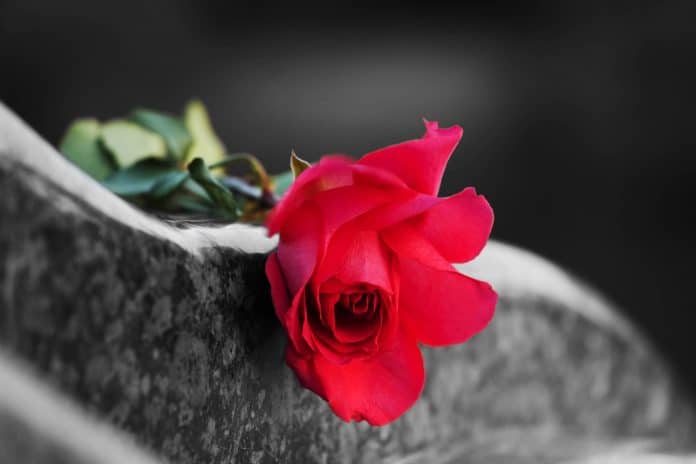 As one of the most desirable men of the silent film era, Rudolph Valentino was an absolute icon.

Valentino—a stage-name that shortened his full name, Rodolfo Alfonso Raffaello Pierre Filibert Guglielmi di Valentina d’Antonguella—emigrated from Italy to the United States at the age of 18.

Frequently cast in “Latin lover” roles, Valentino broke into the national consciousness in 1921 when he starred in one of the highest grossing silent films of all time, The Four Horsemen of the Apocalypse. Later that same year, he played the title role in the controversial film, The Sheik.

Occasionally, the Italian actor bristled at being typecast, but his tall, dark, and handsome look made him irresistible to audiences of the time. He was “triumphantly seductive,” according to one contemporary source, and he “[put] the love-making of the average husband or sweetheart into discard as tame, flat, and unimpassioned.”

At the age of 31, Valentino died suddenly.

In August of 1926, Valentino was hospitalized suddenly due to a ruptured ulcer; a week later, he was dead.

His funeral was, in a word, insane.

First, inconsolable fans began overwhelming the New York police. The Smithsonian reports that the crowd outside of the funeral home totaled more than 100,000 people. Eventually, a riot erupted as the mourners fought to get one last glimpse of the “Latin lover.”

Meanwhile, inside the nursing home, four Black Shirt honor guards (said to be sent by Benito Mussolini) stood by the coffin. Subsequent investigations revealed that the funeral home had hired the guards as part of a publicity stunt—after all, what funeral home would pass up the opportunity for free publicity?

The drama didn’t end there. Before his death, the twice-divorced Valentino was having an affair with Polish actress Pola Negri. Overcome with emotion, Negri fainted onto her lover’s coffin, and when revived, she proclaimed that Valentino had proposed to her.

She pronounced herself the star’s “widow,” the fainted again in front of a massive floral display she’d sent to the funeral home (the flowers spelled out her first name).

But, Valentino’s body wasn’t laid to rest in New York.

His final resting place would be Hollywood, California, the city that had made him a star. On the five-day train trip west, thousands of mourners paid their respects. Finally, Valentino was laid to rest in a second ceremony; Pola Negri attended, of course, and fainted several times—much to the delight of reporters.

One year after Valentino’s death, a woman in black visited his tomb, laying roses at his grave. She kept up this practice for several years, until local reporters noted her presence, prompting dozens of copycats.

The woman’s identity is unknown, but she was likely Ditra Flame. Valentino had visited Flame in the hospital when she was only 14 years old to bring her a single red rose; overcome by the gesture, Flame said that she visited Valentino’s grave every year to pay her respects.

For all of the thousands of people who turned Valentino’s funeral into a spectacle, at least one seemed to truly care about the great actor.