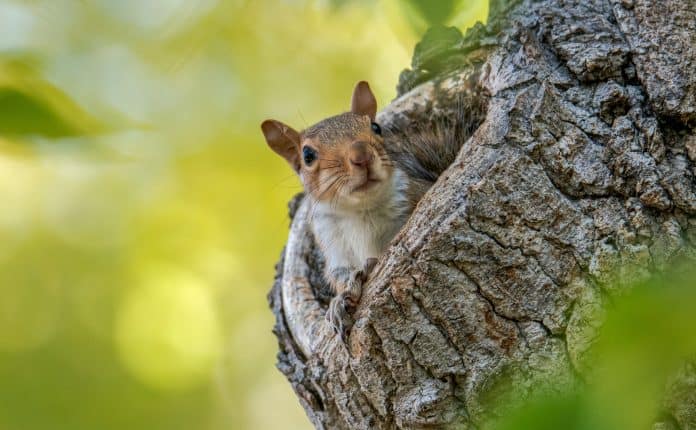 In 2013 Jeff Longo was walking to his vehicle after a long day at work in St. Petersburg, Florida, when he noticed a tiny creature on the sidewalk. The infant animal was smaller than any of his fingers and was utterly helpless.

Having potentially stepped on the little baby, Longo felt compelled to nurse the creature back to health. He logged on to Reddit and asked the internet to help him identify the tiny mammal and to learn how to care for the critter.

Many of the people who responded on that first Reddit thread were skeptical about the thumb-sized being’s chance of survival, but Longo wasn’t about to give up. Others contributed more useful information, helping him identify the wee creature as a female flying squirrel—a species native to the southeastern part of the United States—and suggesting a diet of a blend of cream and puppy formula.

Over a three-month span, Longo nursed the baby flying squirrel back to health, taking it to work in his shirt pocket, which may have made the man’s pet dog a bit jealous. Eventually the bearded man took to calling his new friend Biscuits.

Once the flying squirrel was in good health, Longo posted a series of pictures to Imgur and Reddit called “The Chronicle of Biscuits,” which became an instant internet sensation.

The Today Show picked up the story, as did local news affiliates. As Biscuits was introduced to more and more humans, Longo realized that the flying squirrel was now a domesticated animal.

“I have wanted to set Biscuits free, but since she has zero fear of humans or animals since she was raised around them, I fear she will be eaten or squished in a days time,” Longo wrote on his GoFundMe page.

So Longo and Biscuit’s relationship shifted from a temporary nursing arrangement to a long-term family pet proposition. Initially, she was in a “decent-sized cage,” but Longo wanted “to get her a bigger, better house with more room to jump and fly” and wanted to “fill it with all the toys.”

The Florida man started a fundraising page and crowdsourced enough money to get his little lady a larger habitat. Having raised nearly $2,000, Longo was able to get the small squirrel a 29-square-foot cage, which he took to calling “Biscuit Manor.”

Biscuits is still an internet celebrity. Her YouTube channel has had roughly 4.5 million views. The most popular video features the furry flying squirrel devouring her favorite snack, a pecan, as her puppy sibling looks on enviously.

The nocturnal squirrel doesn’t spend all of her time in Biscuit Manor; Longo has made additions to his house so that it is more flying-squirrel friendly. While in the wild, flying squirrels have been reported to be able to glide up to almost 300 feet, but Biscuit’s record is closer to 30 feet because she doesn’t have much wind or altitude in Longo’s home, which limits her ability to get a really good flight.

Biscuits has even inspired some fan art. Are you a fan yet?

Previous articleThese Simple Tips Will Keep Ticks Off Of You All Summer Long
Next articleShe Gave Birth To The World’s First Surviving Septuplets, Who Have Just Turned 18