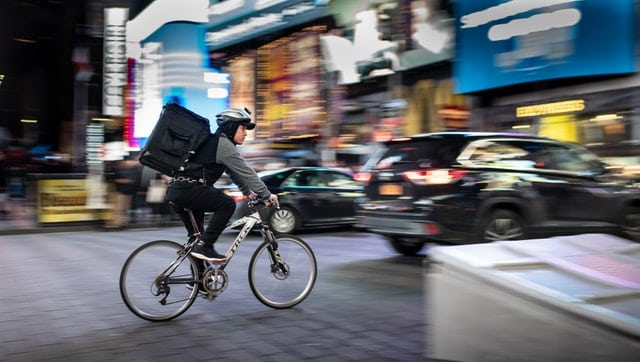 Your vehicle veers off the road, and suddenly, you find yourself in a large body of water.

You’ve only got a few minutes to take action and escape your sinking vehicle. Even if you take a deep breath and manage not to panic, you can only go without breathing for about three to five minutes, but that’s not even the biggest concern; soon, the pressure from the water will make escape nearly impossible.

Unfortunately, the wrong move can make the situation much worse, and you’ve got to act fast. The good news is that public safety officials have studied this problem, so we’ve got some pretty decent answers. Ideally, you’ll prepare in advance—while this isn’t the type of survival situation you might expect, it does happen, and some foresight can prove invaluable.

Here’s what you should do.

Your seatbelt can save your life in a collision, but it obviously can’t help you much when you’re underwater. Your first goal is to prevent anything from holding you in the car, which is precisely what your safety belt is designed to do. Unbuckle it as soon as you can.

Your first goal is to prevent anything from holding you in the car, which is precisely what your safety belt is designed to do. Unbuckle it as soon as you can.

Don’t underestimate the water pressure. When you’re submerged, fluid pressure quickly increases with depth and pushes on an object in all directions. The pressure is dispersed equally, so the deeper you get, the more effort you’ll have to exert in order to open the door.

In other words, water will push against the door as soon as you’re partially submerged, and you won’t be able to open it. Even if you are able to get it partially open, you’ll let more water into your vehicle than necessary, potentially allowing the car to sink faster, since the air in the car provides some buoyancy.

How much buoyancy, exactly? That depends on your car, but it’s not much time. You’ll float for anywhere from 30 seconds to a minute, and that time will seem to pass very quickly.

These days, most vehicles have electric windows. That’s great news if you’re going through a drive-thru, but it’s not so beneficial when you’re sinking into a large body of water.

If you’re lucky, you can still open your windows. Your vehicle’s electronics probably won’t have short-circuited right away, since the electronics are likely in the (mostly) waterproof door, so you should be able to get your window down.

If you’ve got manual controls, that’s even better, but since you’ll start letting water in as soon as they start lowering, you’ll have to move quickly. You’ve only got about 30 seconds to roll down the windows, as after that, the pressure from the water will prevent you from making much headway. That’s why it’s important to act quickly.

If you can’t lower the windows, you’ll have to break them. Remember when we mentioned that a little foresight can save your life? Here’s where that comes in.

Hopefully, you’ve got a rescue tool in your car. If not, get one; these can save your life in an accident. You can pick one up at most hardware stores and large retail stores, and they’re small enough to keep in your glove compartment.

Rescue tools have pointed hammerheads that are designed to break through car glass. Most also have attachments to cut through your seatbelt, in case it gets stuck. Familiarize yourself with all of the functions of your safety tool before the accident. Know where your safety tool is, and check it occasionally for signs of heat damage.

Assuming that you’ve got a rescue tool, the next part is surprisingly easy. Aim for the corner of the window to break it apart.

Why does this work? The side windows of most vehicles are made of tempered glass, which is extremely strong, but it’s designed to shatter into small pieces when hit with enough force (so you shouldn’t have to worry about any big, jagged pieces). Because of the construction of the glass, you’ll have a much better chance of breaking through if you aim for a corner.

You might be wondering why you’re attacking your side windows when the car’s windshield is a much bigger escape route. The windshield isn’t made from tempered glass; it uses treated laminated safety glass, which doesn’t break in the same way. Most windshields actually have two curved glass sheets, bonded to the frame.

They’re designed to hold, even when they crack, so if you try to bust out the windshield, you’ll be working at it for a long time. Again, you don’t have much time, so the best bet is to focus on the tempered glass on the driver’s side door.

Don’t forget: the clock is ticking. As soon as your vehicle’s filled with water, you won’t be able to break the window anymore, since you won’t be able to work up the required force. Make sure that your rescue tool is within reach; if you keep it in the glove compartment, make sure that you get into the habit of leaving the glove compartment unlocked.

5. Swim out the window to safety.

Call 911 as soon as possible, but not while you’re still in the sinking car obviously. Swim out and up, then make your way to the nearest body of land as quickly as you can. Don’t worry too much about cutting yourself on the broken glass; because tempered glass shatters into round-ish bits, you probably won’t get badly injured, and any cuts should be minor.

Try to remain calm. Let your buoyancy take you to the surface. If you’ve crashed into a body of water that has a current, don’t fight it; gradually make your way towards the nearest shore, staying mindful of rocks and other potential sources of injury.

Take deep breaths when possible. When you get to shore, get warm and try to find help. Hopefully, you’ve got a waterproof phone.

6. If you can’t break the window or open it, stay calm.

There’s a chance that you’ll be able to open the door once the entire vehicle’s submerged, provided that you’re in shallow water and you’re fairly strong.

Why? The pressure may equalize, allowing you to force your way out of the car. Remember, pressure increases with depth, so this is only an option in smaller bodies of water.

Of course, you’ll need some strength, so try to remain as calm as possible and take a big, deep breath just before the car’s completely submerged.

So, what are your chances of actually encountering this nightmarish scenario?

Austin does note that there are some issues with the data; for instance, some accident reports didn’t mention whether or not vehicles were immersed, and complex multi-vehicle accidents made reporting difficult. Furthermore, his report only considered fatalities. As such, we don’t have exact information to gauge the risk.

We can conclude that the chances of driving into water are very low, although they vary a bit depending on your state, the type of vehicle you drive, and several other factors. Still, it never hurts to be prepared (and to understand some of the science of immersion).