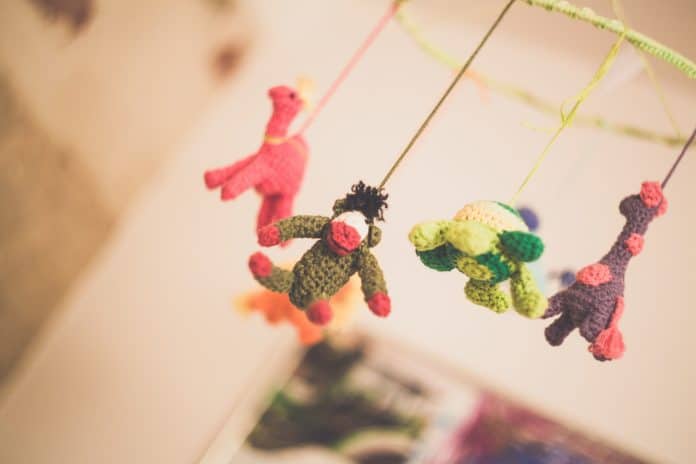 Here’s what went down: Last week, Jenner gave a YouTube tour of the Kylie Cosmetics office.

During the tour, she said that Stormi, her one-year-old daughter with Travis Scott, was sleeping in the onsite nursery and the viewers would get to see her at the end of the video.

“[Stormi] does spend a lot of time here. She really never leaves my side, so we’re here all the time,” Kylie said, showing off her daughter’s pink high chair. “She’ll have lunch here, dinner sometimes, breakfast. She is always here.”

“She motivates me every day to work harder and be a better person.”

After bringing viewers through the office, including the kitchen with a champagne vending machine, Jenner went into Stormi’s nursery to wake her up from her nap. She flipped on the lights.

“Rise and shine,” she sang. That’s all it took for social media to go wild.

We can’t tell you why this moment swept the internet away. Maybe it’s how much heart Jenner put into her reverse-lullaby; maybe it’s the jump cut immediately afterward—we don’t get to see if Stormi ascended angelically from her crib and crooned a lovely lyric of her own. “He-ello Mooom.”

Nonetheless, the moment became a meme-mine.

Kylie Jenner rise and shine but with autotune pic.twitter.com/6n7mMdetPU

Someone made a dubstep remix:

Ok but do y’all hate me yet pic.twitter.com/W3i6Z6y4CO

Somebody gave it the vocal backing it deserved:

I added a choir to “Rise and Shine” by Kylie Jenner pic.twitter.com/3UcfGT120U

And someone showed their true love for Jenner’s track:

Needless to say, “Rise and Shine” has been a big, big deal in the music space.

Heck, even Miley Cyrus got in on the act:

And so did Jenner herself:

Is Tyga trying to tell us something?

After the internet went crazy over the “Rise and Shine” meme, Jenner’s former boyfriend Tyga seemed to try to get on the action. Check out the caption on his Instagram post. (Sweet car, dude.)

“Rise n shine,” the rapper wrote. Fans in the comments immediately started accusing him of being petty; some even suggested that he was trying to imply something was going on between the two.

After news of her split from Scott last month, a tabloid claimed that Jenner had spent time with Tyga in the early hours of the morning. The rumor circulated alongside photos of two of Jenner’s close friends at a recording studio in Los Angeles that Tyga was using.

Jenner was quick to shut down rumors of her reunion with Tyga. She took to Twitter, saying, “The internet makes everything 100 times more dramatic than what it really is. There was no ‘2am date with Tyga.’ You see me drop two of my friends off at a studio that he happened to be at.”

The internet makes everything 100 times more dramatic than what it really is. There was no “2am date with Tyga”. You see me drop two of my friends off at a studio that he happened to be at.

“There is really no reason to believe that Kylie is interested in any more with Tyga,” a source told People. “She isn’t totally finished with Travis and it does seem she hopes they can somehow find a spark again. She is definitely in no rush to date again.”

On Wednesday, Ariana Grande took a swing at the “Rise and Shine” meme.

Ariana Grande shows off her vocals with a rendition of Kylie Jenner’s viral “rise and shine” meme. pic.twitter.com/AQy8X1IMI0

“Can I sample?” Ariana wrote in her Instagram Story. Jenner responded, saying “Yes, yes you can. As long as I’m in the music video.”

If you need us, we’ll be over here impatiently waiting for the “Rise and Shine” single by Ariana Grande featuring Kylie Jenner to hit Spotify.

On Wednesday, Jenner uploaded a video of Stormi listening to what sounds a techno version of “Rise and Shine.”

The video starts off with Stormi bopping along to the “Rise and Shine” remix. Kylie then asks Stormi if she likes the song and Stormi asks “Is Daddy?” to which Kylie responds “No, its mommy! Mommy’s singing!” Then Stormi pauses the song and asks for her dad to sing.

Travis commented on the video with heart eyes and a red heart, simply saying “wild.”

It’s clear that Jenner is in on the joke, and she’s ready to capitalize on it, too. On Thursday, she posted links to two new “Rise and Shine” hoodies, one black and one white, available at her merchandise shop.

Labeled as limited edition, the hoodies cost $65 and are estimated to ship four to five weeks after ordering from The Kylie Shop.

Let’s just say we wouldn’t be surprised if we see a “Rise and Shine” eyeshadow palette from Kylie Cosmetics sometime soon.