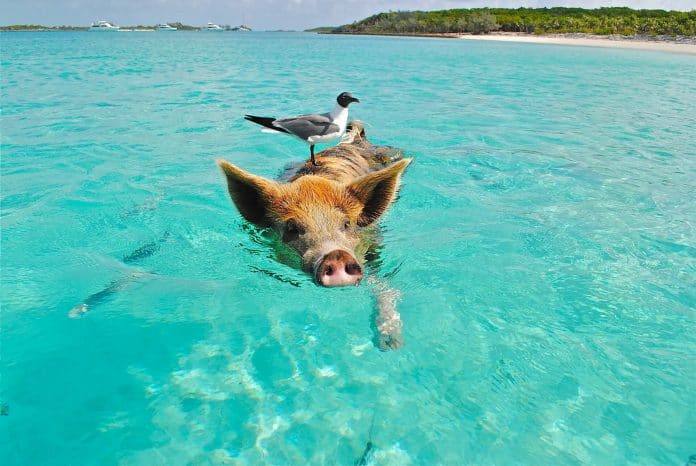 Whether it’s ducklings fallen down a drain, a cat stuck in a tree, or a dog chained up and abandoned, it’s not uncommon to hear stories of humans heroically saving animals.

Not all heroes are humans, though. Here are the stories of four real-life animals who accomplished amazing feats to become heroes in their own right.

In 1998, Jo Ann Altsman was on vacation in the north woods of Presque Isle, Pennsylvania. Along with Altsman were her pig, Lulu, and her dog, Bear. Altsman, alone aside from the company of LuLu and Bear, began to go into cardiac arrest. Panicked and unable to move, Altsman (who had suffered another heart attack just 18 months earlier) lie on the floor, desperately calling for help.

According to The Pittsburgh Post-Gazette, both Bear and LuLu noticed their owner’s distress and tried to get help. While Bear barked at Altsman and attempted unsuccessfully to break through a bedroom window of the mobile home where they were staying, LuLu likewise sprang into action. After crying next to Altsman for a moment, she squeezed through the doggy door of the mobile home. Despite having never left the fenced yard aside from leashed walks, LuLu managed to force the gate open and run to a nearby road.

According to witnesses, when a car passed Lulu would calmly walk out in front of the approaching vehicle and lay down. Each time a car, honking and swerving, failed to stop, LuLu would run back to Altsman to check on her, then return to the road.

Finally, one motorist (who chose to remain anonymous) stopped to investigate. Sensing that LuLu was trying to lead him to something, he followed the pig back to the mobile home. Inside, the man saw Altsman and immediately called 911. When paramedics arrived, LuLu even jumped into the ambulance with her.

Despite repeatedly putting herself in harm’s way by laying in the road, LuLu’s only injury was a small cut she sustained while squeezing through the mobile home’s doggy door.

For her heroic deed, LuLu received an enormous amount of local media coverage and, more importantly, a jelly doughnut.

In 2009, Yang Yun was participating in a breath-holding competition at Polar Land Harbin, China. In the competition, participants had to sink to the bottom of a 20-feet-deep arctic pool housing Beluga whales, remaining there for as long as they were able.

As 26-year-old Yun’s breath began to run out and she decided it was time to return to the surface, frigid water caused her legs to cramp up. “I began to choke and sank even lower and I thought that was it for me – I was dead. Until I felt this incredible force under me driving me to the surface,” she told The Telegraph.

Luckily Mila noticed Yun’s distress, and took action. “We suddenly saw the girl being pushed to the top of the pool with her leg in Mila’s mouth. She’s a sensitive animal who works closely with humans and I think this girl owes her life,” one organizer said.

Sure, cats can be cuddly and adorable, but you probably wouldn’t expect your cat to save your life. Amazingly, that’s precisely what happened to Cathy Keesling and her family.

One night in 2007, as Keesling and her family slept in their New Castle, Indiana, home, a broken gas-powered sump pump in their basement began filling the house with poisonous carbon monoxide gas. Luckily for the family, Winnie sprang into action meowing loudly and scratching Keesling. When Keesling finally awoke, she found that she was barely able to dial 911. “If it wasn’t for Winnie, screaming and hollering and carrying on, we wouldn’t be here today,” Keesling told local NBC station WNDU.

“When we got to the door, she was delusional,” Indiana State Police officer Richard Silcox told WNDU. “14-year-old Michael was laying in the hallway already passed out.”

“I’m sure it’s a hero,” Deputy Sheriff Landon Dean told the station. “Even if the cat had waited another five minutes, the outcome would have been horrible. I think it would probably have been a coroner case for sure.”

4. The Three Lions of Addis Ababa

While the story of a domestic cat saving the life of a human is certainly an unlikely one, the story of three wild lions saving a human child’s life sounds downright impossible. Amazingly, though, it actually happened.

In 2005, a 12-year-old girl from Addis Ababa, Ethiopia, was abducted and beaten by a group of men trying to force her to marry one of them—a practice all-too-common in the nation’s rural areas. In a turn of events that sounds more like something from a Hollywood movie than reality, three lions chased the girl’s captors away, then spent half a day guarding her before police and relatives arrived.

“They stood guard until we found her and then they just left her like a gift and went back into the forest,” Sergeant Wondimu Wedajo told the Associated Press, continuing, “If the lions had not come to her rescue, then it could have been much worse.”