This Man Spends His One Day Off Cleaning Veterans’ Tombstones 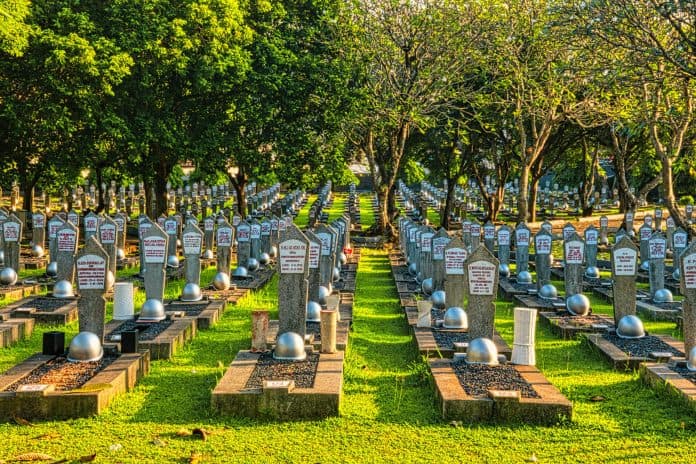 Andrew Lumish is a cleaner by trade.

He’s a specialty cleaner, and he’s capable of cleaning just about anything—when you need someone to patiently scrub and brush for hours on end, Lumish is your man. He specializes in upholstery and carpet, and business is good; he regularly works six-day weeks.

But lately, he’s been grabbing headlines for what he does in his free time. Lumish visits cemeteries, where he looks for old tombstones that have been damaged by years of neglect.

Lumish looks for headstones that belong to veterans. When he finds one, he gets to work, pulling out bottles of cleaner and spending hours carefully scrubbing away moss, dirt, and grime. Sometimes, the process takes months. Sometimes, it takes a few minutes. In just about every case, however, the tombstones look brand new when Lumish puts away his rags.

He restores the marble, taking care to clean without causing damage. In the end, the markers are much easier to read—and for Lumish, that’s important.

“If [visitors] can’t read [the tombstones] at all, they can’t celebrate it, they can’t honor that person, they can’t appreciate that person,” he said to CBS News. “Whereas if you properly restore the monuments, you can begin an entire conversation, and potentially—in a figurative sense—bring that person back to life.”

In some cases, he’s done in a few minutes. In others, he takes hours. Regardless of how long each job takes, Lumish sees it through, working until the gravestone is pristine.

He’s been dubbed the “Good Cemeterian” for his acts of kindness. Every Sunday, Lumish is out in cemeteries, looking to honor the veterans of U.S. wars the only way he knows how.

He’s started documenting his work on social media, where he’s attracted thousands of followers. Many of them thank him for what he does, but while he appreciates the praise, Lumish feels it’s misplaced.

“I am appreciative of it, but I’m unworthy of the same respect of someone who chooses to go the route to serve our country,” Lumish said to CBS. “And for someone to approach me, to show me that level of respect, it’s humbling, to say the least.”

Lumish helps to prevent the memory of individual veterans from fading away.

He posts their markers on Facebook and Instagram, but he also does research, locating information about each of his veteran subjects. He posts that detailed information online, creating a permanent digital monument to the heroes of the past.

However, his goal isn’t hero worship; he includes every detail he can find, even the occasional bit of lurid information. He told Reader’s Digest about one such case.

“It’s a war hero who won a medal of honor for serving in the Civil War and was thrown in jail for not paying child support,” he explained, adding: “It’s like the Real Housewives of 1895.”

Lumish has no plans to stop his work anytime soon. He’s performing a tremendous service for free—and the families of veterans are thankful. Check out the Good Cemeterian on Facebook here.