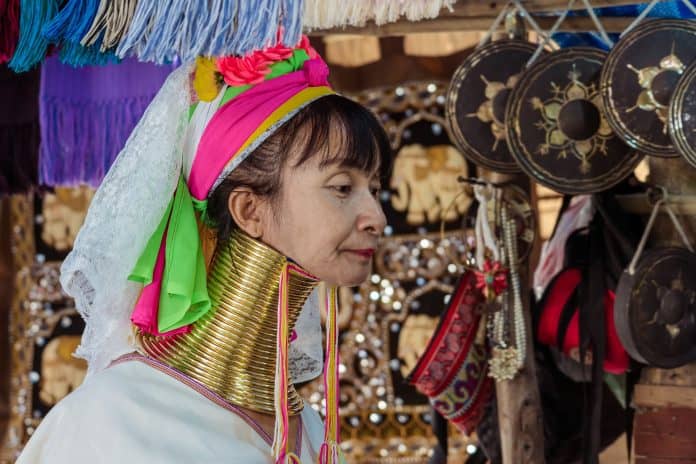 Having an elongated neck has been a standard of beauty for centuries, and it’s a goal some of today’s women still strive for. We’re not necessarily talking about achieving it with surgical cosmetic procedures, though—we’re talking about the practice of lengthening the neck with rings.

Though strange to some, it’s one of the oldest types of body modification in world, and one that many women still follow in a few different parts of the world—some even here in the United States.

Its origins are mysterious.

In southeast Asia, historians have been able to date the practice of using neck rings all the way back to the 11th century. However, no one has been able to discover a concrete reason for why they did it. One of the biggest legends surrounding the rings claim that villagers wore them as a defense against tiger attacks, which were most likely to be directed at the neck. Another says that it was to protect women from being taken by men of rival tribes by giving them a less-appealing look. However, the exact opposite is true today, as the tradition is alive and well in Myanmar where the look is considered to be beautiful and elegant.

Within Africa’s Ndebele tribe, the women of the tribe wear copper and brass rings not only around their necks, but around their legs and arms, as well. The rings are given to the women by their husbands and worn as a sign of faithfulness, and were once removed only after the women died—today, however, the women don’t tend to wear them permanently.

At the age of 5, girls in the Karen (or Kayan) and Padaung tribes of Myanmar are fitted with their first rings. Wearing them isn’t always an easy task, though. The coils, which are typically made of brass, weigh around four-and-a-half pounds to start with, and then more coils are added over time.

In some cases, the coils they wear are replaced entirely so that thicker coils can be added in their place. It has been said that many of the girls and women enjoy having their coils changed because it is the only opportunity they have to see that area of their bodies uncovered.

Though the point of wearing the coils is to elongate a woman’s neck, that’s not actually what it does at all. Yes, their necks clearly will look longer after wearing them for some time, but it’s not a result of their neck bones somehow stretching out—it’s because the weight and pressure of the coils on their collarbones pushes them down. In fact, one of the main reasons why some tribes choose to begin the practice when girls are young is because their bones are more pliant, making the desired results easier to achieve and with less pain.

Wearing the rings doesn’t just affect the collar bones, though. When the rings push down enough, they can actually cause the position of the rib cage to shift, as well—typically, wearing the rings will move the rib cage and the collarbones approximately 45 degrees below where they normally sit in the body. They will also cause the shoulders to slope forward and weaken the muscles in the neck.

That’s not the worst part.

The neck is a fairly sensitive area to begin with, so adding that amount of weight and pressure to it doesn’t do great things for it. Not only are the coils not entirely comfortable to wear, but they can also lead to permanent muscle weakness in the head when worn for long periods—it’s the coils that hold up the head, so the neck muscles don’t get used and become weak.

The problems don’t stop there, though. The rings can cause near-constant chafing on the skin of the neck and shoulders, which is also more likely to become pretty susceptible to bruising while the rings are on. One woman even discovered that mold had been growing on the area of her neck hidden under the rings, and she developed permanent scars from wearing them.

Still, it’s a tradition that people once fled their homes to protect.

When Burmese military forces took control of Burma (now Myanmar) in 1962, they hoped to help modernize society there. One of the ways they planned to do this was by eliminating what they considered to be “primitive” aspects of the culture, including neck elongation.

To protect the tradition, many tribes in the area fled to nearby Thailand and, although it did help them keep the practice of wearing neck coils alive, it also turned the tribes themselves into a tourist attraction. However, many women both young and old are more frequently making the decision to remove their rings, despite social repercussions.

One American woman even tried it out for herself.

Inspired by a National Geographic documentary, a Los Angeles woman named Sydney V. Smith decided to have a set of neck rings fitted just for her. “In middle school, they called me ‘giraffe girl,’” she said in an interview with HuffPost. “Then I saw the pictures of the long-necked tribes in Thailand and Burma in National Geographic and I became fascinated with them.”

She was even featured on an episode of the show My Strange Addiction because of her obsessive interested with neck elongation, though she eventually did have them removed. Don’t be quick to judge, though—she ultimately just did something other people use exercises and surgeries to achieve.

Previous articleA Bad Last Impression: Looking Into The 5 Worst Series Finales Of All Time
Next articleGiant Clocks And Pickled Sharks (And Charity, Too): Here’s What Billionaires Spend Their Money On

The price we pay for presents under a tree. Here's how Santa, the Easter Bunny, the Tooth Fairy, and other childhood figures came about.
Read
Culture

7 Essential Secrets Of All Magicians

Pulling together a magic act takes a lot more than you think, yet the tricks are somehow much simpler than you'd ever imagine.
Read