7 Secrets That Food Trucks Don’t Want You To Know 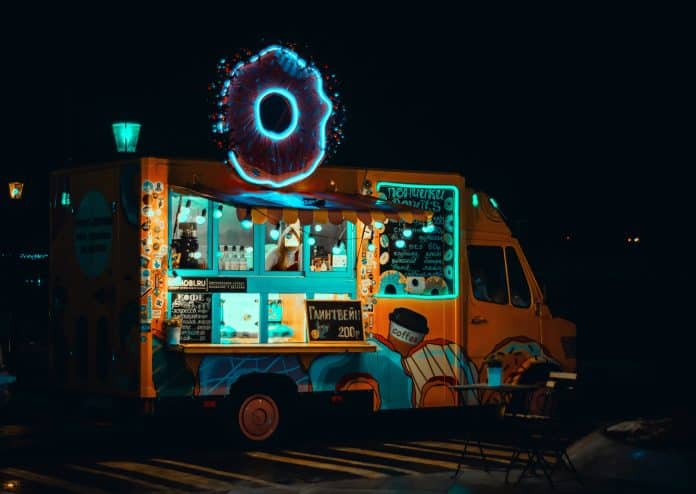 They’ve certainly come a long way. Gone are the days of questionable mobile cuisine; today, you can find a variety of ready-to-go gourmet foods, prepared in a small kitchen and served through a small window for a couple of bucks. What’s not to love?

However, before you head down to your favorite food truck, we’ve got a few illuminating facts. You might not know that…

1. The business is bigger than you think.

Think you’re the only person who knows about your favorite local food truck? Think again.

The industry’s booming, with an annual revenue of at least $1.2 billion in 2015. That’s a 12 percent increase over the past five years, and with more than 4,000 trucks nationwide, the food truck trend shouldn’t die out anytime soon.

That’s not to say that it isn’t competitive, however. Successful business owners know how to park their trucks in prime locations, which sometimes requires a cutthroat attitude. Oh, and brick-and-mortar restaurant owners generally hate food trucks, so they file health complaints with the city if they see their competitors setting up shop nearby.

“Most of the complaints [about the trucks] seem to come from local food establishments that are in competition with them,” said Jonathan Dalton, an environmental health specialist with the Southern Nevada Health District, to HuffPost.

While food trucks are less expensive to operate than brick-and-mortar stores, they’re by no means cheap. FastFoodTruck.com estimates startup costs of around $30,000-$80,000, noting that “food truck maintenance costs add up quickly.”

That quote doesn’t include permit costs, by the way, and those are expensive in some areas. Forbes claims that in some areas, total food truck startup costs can run upwards of $125,000.

In other words, if you’re thinking about joining the industry, don’t expect to park your truck on a random street and start handing out pitas. You’re going to need serious capital to get the business off the ground—not to mention a solid understanding of local laws.

That’s part of the reason that food trucks can be so surprisingly expensive. On average, diners pay $9.80 for lunch at a food truck and $14.99 for dinner.

To avoid costly, complicated permit laws, some food truck owners buy property and set up shop. That sort of defeats the purpose of a food truck, since the actual vehicle never moves.

Adam Sobel, owner of the Cinnamon Snail in New York, admits to using this technique to get around restrictions.

“If the city changed the way they regulated food trucks, I’d be back to having trucks on the street in no time,” he said.

But even that measure doesn’t prevent regulators from stepping in. Regulations in Aiken, South Carolina, mandate that “food trucks can only operate on private property if they have the owner’s permission and the property has zoning that allows eating establishments.” The city also has strict ordinances to establish operating hours and buffer zones from brick-and-mortar restaurants.

4. Owners go through the black market.

Unfortunately, there are few alternatives for some business owners. Sean Basinski of the Street Vendor Project in New York told Forbes that the city’s antiquated vendor codes prevent new food trucks from setting up shop.

“In the early 1980’s the city imposed a cap on vendor permits, up to 4,000, and it hasn’t changed since, which makes it impossible to get a permit of your own,” Basinski said. “If you don’t want to wait 20 years, you have to go onto the black market which is expensive and risky and filled with intrigue.”

5. Food trucks can be dangerous and risky.

Take the case of The Bird, a food truck in Houston, Texas. The restaurant’s owner left town for a few days, only to find that his entire business had been stolen while he was away. Authorities later found the truck, but an arsonist had already destroyed it.

“This experience has been very trying for us,” The Bird owner Carvis Tucker wrote on Facebook. “With the truck being found burnt up in a bayou and with our insurance being very uncertain, we honestly don’t know what our next steps will be at this time. With that being said, in the upcoming weeks things will become a bit clearer as to what will happen next.”

In Albemarle County, Virginia, police arrested a couple for attempting to rob a food truck. As mobile restaurants have become more commonplace, criminals have taken notice.

“There’s only so long you can get away with ‘it’s good because it’s a food truck,'” said Matt Cohen, founder of Off the Grid, a food truck event organizer, to The San Francisco Gate.

Successful chefs say that they embrace the limitations of the food truck, focusing on creating one type of simple item rather than stocking their menu with customer favorites. They also know their audience—and yes, that means appealing to hipsters.

“Our business model is definitely built on the element of the elusive cool—it’s not there all the time so I’m going to take advantage of it when it’s there,” Cohen explained.

“I feel that many food carts fail because they spread themselves too thin,” writes Ryan Carpenter of Moberi for Food Truck Empire. “Embrace what’s different about the restrictive environment of a cart. Focus. Do one item, ideally something unique, do it very well, and offer it at a good price.”

“Most of the truck owners I know are very good cooks, but there is that, too—you have to have to have exceptional food,” said Teri Fermo of Bohemia: Moveable Feast Caterers in Tulsa, Oklahoma. “I am a trained chef, but before that I was front of the house for many years. I think that you must have a way with people—gift of gab sure has helped me.”

7. Some businesses operate illegally and that comes with consequences.

By law in most areas, food trucks must post their licenses and permits in their windows. If you can’t see a license, there’s a chance that your food truck isn’t following proper safety procedures.

“You can actually ask to see the license,” Sarah Klein, a food-safety expert at the Center for the Science in the Public Interest, told CNN. “If they can’t produce it, find another place to eat and call the local health department.”

Consumers can also check individual food trucks’ grade ratings with their local health departments. The good news is that, for the most part, food trucks are fairly safe.

“Many of the health inspectors in our office buy lunch from food trucks,” said Christie Sweitz, interim supervisor for inspection in Portland, Oregon. “Trucks are required to follow strict guidelines and they are inspected as often as restaurants.”

In other words, you can dine with confidence—provided that you check for health certificates before you order.