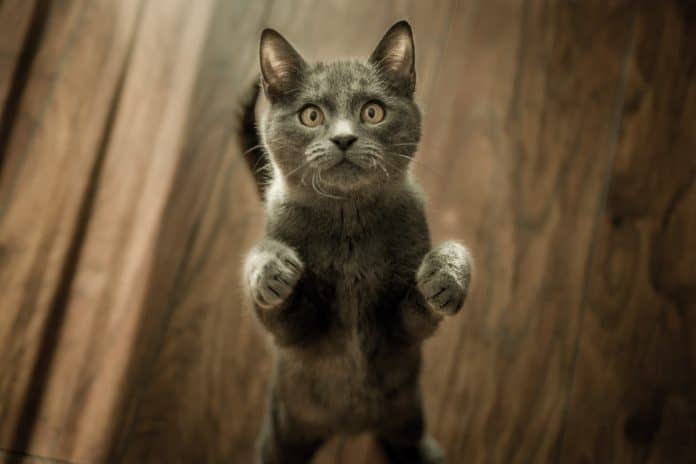 Anyone who’s ever owned a dog or cat knows that, as cute as they are, they can be strange. From knocking things off counters to barking at nothing for what seems like hours, most people just accept these behaviors as part of being a pet parent.

Have you ever wonder why they do it, though? Reddit users recently shared the weirdest things they’ve ever caught their pet doing, and we’ll give you a little more insight into why.

When Cats Knock Things Over

“My grandmother had a psycho cat that hated me. One day this cat jumped up on a shelf that contained picture frames of each of my cousins. That cat looked me in the eye as it batted my picture off the shelf but left the other ones in place. She then jumped down and walked away, watching me as she passed.”—Booner999

While we can’t explain why this cat singled out just one person, there is an explanation for why cats just love to knock things over. They often do it just to see if what they’re touching is something they can eat.

However, they’ve also realized that knocking things over can get their humans in the room pretty quickly, so they do it for attention, too. Taking the first explanation into account, Booner999 needs to watch their back.

When Dogs Act Up For Attention

“My dog once jumped out of my girlfriends moving car and hurt her paw. Well that’s not the weird part, the weird part is where about a month later the dog continued to limp around me and whining knowing I’d let her on the couch next to me for cuddles. I caught this b*** acting all normal when she didn’t realise I was watching her from the other room one day, and when I went in to confront her she went back to limping and giving me the pouty face. It was the most unsettling thing seeing how she was manipulating me.”—Levion687

As weird and hilarious as this is, it’s actually pretty easy to explain. Dogs are smart, and they know that they get extra attention when they’re injured.

As much attention as you might give them normally, they don’t want the extra love to go away, so they keep acting hurt to get it.

When Cats Freak Themselves Out

“Our black cat used to puff himself up in front of the mirror (my wife and I refer to it as ‘Halloween cat’), stiffen his legs, and bounce back and forth toward and away from the mirror. It’s not exactly creepy, but waking up at 2:45 am and seeing a little silhouette bouncing back and forth on the floor is scary for those first couple of seconds when you’re waking up.”—mimitchi86

Cats can puff out their fur for a number of reasons, and the most common one is as a threat response.

However, when combined with some hops, the reason is more likely that the cat is being playful, especially if they think they’re actually looking at another cat when looking in the mirror.

When Dogs Howl at Night

“She will sit up in her sleep and howl. I don’t know if you’ve ever had a Great Dane howl at 3 AM right next to your ear, but it’s pretty goddamn frightening.”—LaBelleCommaF***er

Dogs don’t know that the middle of the night isn’t really a great time to howl, but it’s a totally instinctual thing for them to do. They might be doing it to announce their presence to another dog they heard howling, or they could’ve heard a siren going off and decided to respond to it. The explanation doesn’t make it any better when you get startled awake, but at least you know it’s innocent.

When Cats Open Doors by Themselves

“My cat can open doors if they aren’t fully latched. I woke up one night and she had opened the door while a guest was pooping and wouldn’t let them close it. Thankfully the toilet was right there so she didn’t just swing it all the way. Had to call her away because all she did was paw at them and make a screechy sound.”—mystery_fistery

No, your cat isn’t interested in watching you use the bathroom. They just want to be with you! Cats are very social animals by nature, and they don’t like to be left out. As annoying as them barging in or scratching at doors may be, just remember that they’re doing it because they want to be near you.

When Dogs Stare into the Corner

“Sometimes my dog will literally just stare into an empty corner of a room and turn her head from side to side. She doesn’t break her gaze unless you physically force her to turn her head. If you approach her from behind while she’s starting at the corner and startle her, she viciously lashes out and bites. She is an otherwise peaceful animal. It makes me wonder if she can see something that I can’t that is threatening.”—nickerygolding

There are a lot of reasons why dogs stare into corners and, no, it’s probably not that you have a demon in your house. In some cases, your dog might be hearing a rodent of some kind that’s making its way through your walls.

If your dog is old, it could also be an unfortunate sign that their mental function is declining, which warrants a trip to the vet. However, if your dog is perfectly healthy and spends a lot of time barking at empty corners? Demon.

When Cats Sit on You and Stare

“I regularly wake up to my cat standing on my chest staring at my face point blank. Not sure if he wants breakfast or is considering smothering me in my sleep… only time will tell…”—TriceratopsHunter

As weird as it is, your cat standing on top of you at any time of day or night is just another sign that they love you. That doesn’t make it any less creepy to wake up to a kitty face hovering over you, but at least you can take comfort in the fact that they’re not going to murder you.

When Dogs Chew the Same Things Over and Over

“I had a pitbull that would chew the right eye out of every chew toy or doll my daughter would leave within reach. Always thought that was peculiar.”—Frawgalla

If your dog does this too, we’re here to tell you that it’s not secretly plotting to kill you. We all know dogs love to chew, but why would they go for one part of the toy over another? It really just comes down to what’s easier for them to latch onto and pull off.

When Cats Are Constantly Hunting

“Creepiest thing I have seen my cat do is to crouch under the table on my deck of just inside the door to the house and imitate birds to lure them in and pounce and carry them inside to play with. It was like watching a tiny torturer lure in and kill his victims. He has incredible mimicry skills.”—ManSeekingToucan

Cats are natural-born hunters, and those instincts don’t go away just because they live indoors with you. Playing with their still-living food before they eat doesn’t mean they’re psychotic—they’re just trying to sharpen their hunting skills.

When Dogs Mark Their Territory

“Before my daughter was born I had an awesome Dale Earnhardt jr/Star Wars computer room/library. When my firstborn came we converted it to a nursery…. One day while no one was home the dog climbed into my newborn daughters crib and took a giant sh*t right in the middle of it. The crib was placed where the dogs bed used to be and it was a pretty clear message as to what the dog thought about the new invader.”—Darth-Obama

This owner already seems to know the exact reason why his dog did what he did—to claim his territory. Just like dogs mark spots with urine, they do the same thing with poop, and their human family members aren’t immune from it, either.