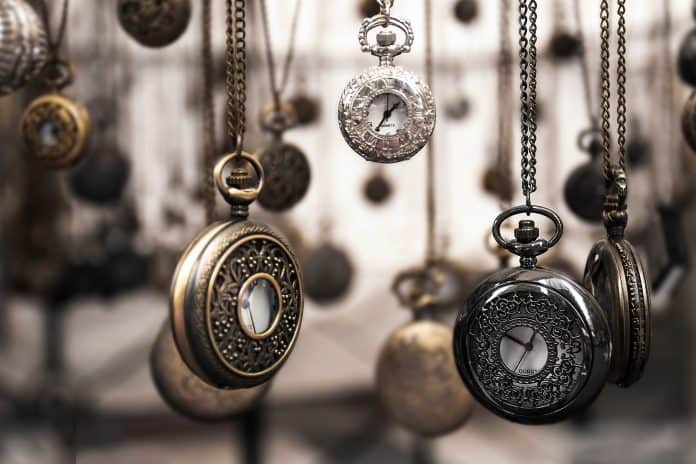 We all know the story of Rose and Jack, but how about the story of Virginia and Walter? The tale of their final days is one that may have inspired the famous romance in Titanic.

If you’ve seen Titanic, you know that there isn’t a person alive whose heart didn’t sink just like the boat when Rose gently dropped the Heart of the Ocean in the sea at the end of the film.

While it’s definitely a dramatic moment, until now you probably assumed it wasn’t anything other than a fictional scene meant to make our jaws drop. Did you know, though, that the event in the movie was actually based on something real?

On April 15, 2017, Las Vegas’ Luxor Hotel & Casino opened “Titanic: The Artifact Exhibition,” organized by Premier Exhibitions to recognize the 105th anniversary of the day the Titanic plunged to its eternal, icy home.

Among the many objects displayed is an 18-karat gold locket that belonged to a passenger named Virginia Estelle McDowell Clark.

Believe it or not, it could be her very story that served as the inspiration for the romance between Rose and Jack.

Virginia boarded the Titanic along with her husband, Walter Miller Clark, so the two of them could return to their home in Los Angeles. They had been in Europe on their belated honeymoon and were eager to return home so they could be with their son on his second birthday.

According to Alexandra Klingelhofer, a curator for Premier Exhibitions, the Clarks were first-class passengers aboard the ship and had actually cut their honeymoon short to return home.

Like most other passengers, Virginia and Walter likely thought that they were perfectly safe on the giant ocean liner, assuming they’d be home to their son in no time. After all, the ship was billed as completely unsinkable, and most people didn’t question the claim whatsoever before they decided to hop on board. Unfortunately, however, Virginia was the only one of the Clarks to make it back home—and it’s because of her husband’s sacrifice that she did.

When the ship made its fateful contact with the iceberg in the northern Atlantic Ocean, Virginia was in her cabin by herself. When she felt the shock from the impact, she immediately went to find Walter, who was in a lounge playing cards with some other men, apparently unfazed at the time by the vibrations he must have felt from the collision.

When the pair realized what had actually happened, they immediately rushed to the lifeboats, hoping that both of them would be able to make it to safety.

As we all know from the film Titanic, women and children were allowed to board the lifeboats before anyone else, and it was no different in real life. Much like Rose and Jack, Virginia and Walter were separated as he made sure his wife was on a lifeboat and on her way to safety. Although they hoped they could be reunited eventually, it never happened.

What’s perhaps the most tragic part of their story is that Walter could have joined Virginia on the boat but had no idea. “When they got up to the boat deck, they were still separating men from women and children and he placed her on one of the lifeboats,” Klingelhofer said of that day.

“The boat was supposed to pick up additional passengers as it got lowered down each level but logistics prevented that from happening. So the boat ended up on the ocean surface with many other seats available. Had they known earlier, Walter could have gotten onto the boat with her, but he did not. He stayed with the other first class men and bravely went down with the ship.”

Virginia did eventually make it back home and lived for another 45 years or so, passing away in either 1957 or 1958. Unfortunately, her son passed away before the locket was found and linked to his parents.

The locket was one of the most exciting things to be found in the wreckage of the ship, but there were also a few other items found that belonged to the Clarks.

They were discovered in 1994 during an underwater mission that set out to explore the wreckage of the sunken ocean liner. The cabin that the couple stayed in during their time on the ship was located close to where the boat broke in half, according to Klingelhofer.

In addition to the locket left behind by Virginia, the mission crew also discovered some cufflinks made from golden Turkish coins, some golden lapel pins, a cosmetic compact plated in gold, and a few poker chips.

The crew also found a brass shaving container that actually still had the shaving soap inside of it when it was discovered.

In addition to the Clarks’ belongings, many other interesting things have been recovered from the wreckage of the Titanic throughout the years, some of which were donated to exhibits by the people who survived the wreck.

This pair of white cotton gloves was discovered in a suitcase among the remains of the ship. They are believed to have belonged to one of the passengers based on where they were found.

They were recently put on display by Guernsey’s Auctioneers & Brokers.

This White Star Line napkin currently sits in SeaCity Museum in Southampton, England. This is the city from which the Titanic originally set sail, and the museum opened exactly 100 years after the date that the ship set off on its one and only voyage.

This napkin was actually recovered from the ocean floor, and based on all the detail it has, it was likely used by first-class passengers during their lavish meals.

Although this looks like any other pocket watch you may have seen from this period, the story behind it is chilling. It was found on a deceased steward from the ship named Sidney Sedunary, and it is also on display at the SeaCity Museum.

The watch was found with the hands stopped at 10 minutes until 2 a.m., which is right around the time the ship would’ve been completely submerged.

A Menu and Keys

Earlier on in the day that the Titanic sank, this menu was passed around to first-class passengers. We can only assume it’s in such good condition because the person it was given to kept it with them and didn’t realize they still had it until later.

The keys pictured belonged to a crew member by the name of Samuel Hemming, who used them to retrieve lanterns to be placed on the lifeboats on that fateful day.

This menu given to second-class passengers seems like a far cry from the food served to anyone who had the luxury of being in first class during their time on the ship. Ask us, though, and we’d probably prefer to eat what’s listed here, if only because we actually know what the items are.

This menu is on display at the SeaCity Museum, like many of the other items. Although it’s unclear whether a passenger carried it with them or it was discovered underwater, it was made for the day the ship sank.

This $5 bank note was recovered from wreckage of the Titanic and is in surprisingly good condition after being underwater for quite a while.

The note was part of the 1907 series and features Andrew Jackson, whom we now have on the $20 bill. The note was auctioned off in 2012 by Guernsey’s Auctioneers & Brokers.

Previous articleHere’s Why You Should Never, Ever Squish A Centipede In Your House
Next articleSchool’s (Not) Out For Summer: Career Myths That Need A Permanent Break

The practice of neck stretching has been around for centuries, but lengthening the neck isn’t even what it does.
Read
Culture

The price we pay for presents under a tree. Here's how Santa, the Easter Bunny, the Tooth Fairy, and other childhood figures came about.
Read
Culture

7 Essential Secrets Of All Magicians

Pulling together a magic act takes a lot more than you think, yet the tricks are somehow much simpler than you'd ever imagine.
Read