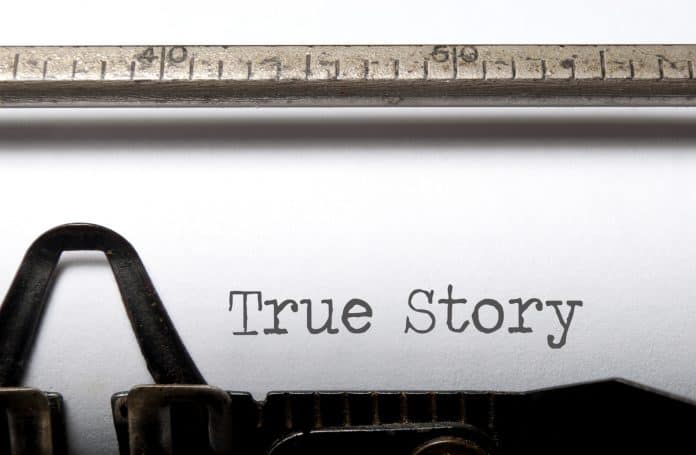 When you watch a movie based on real life, it can have a profound effect. You usually find yourself researching the story or person as you walk out of the theater. You may not have known these movies were based on true stories, but they still deserve their own Google search.

Despite the fact it was released in 2004, The Notebook still reigns supreme in the genre of romantic movies. Women love it, men secretly enjoy it, and all of us wish for something like the love we witness between Noah and Allie. Perhaps the reason this film is so undeniably heartfelt is because it is based on a true love story.

The film, which was based on Nicholas Sparks’ book of the same title, was loosely based on the lives of Sparks’ wife’s grandparents who had been married for over 60 years when he met them. It’s a wonderful story that makes an excellent book and one heck of a good film.

This dark drama stars Winona Ryder and Angelina Jolie. It became a fan favorite in 1999 but very few people knew it was based off a memoir of the same name.

The author, Susanna Kaysen, wrote about her time in a mental hospital for 18 months where she was eventually diagnosed with borderline personality disorder. Kaysen wrote the book almost 30 years after she spent time in the mental hospital but with help from lawyers she was actually able to obtain her medical records and documents to give it the most authenticity possible.

Chicago was first a play, then a silent film, then a Broadway musical, and then a musical film.

The play was written by Maurine Dallas Watkins in 1926 and was based on real life murders she had read about in the Chicago Tribune paper. Her play was adapted by Cecil B. DeMille and became a big hit, which has lead to its ongoing success and variations.

But, it all started with a project while Watkins was at Harvard and first heard about these cabaret singers murdering their husbands in 1924. Some of the names are of course changed, but their stories are very similar.

The Sound of Music

One of the most classic musicals of all time was, in fact, inspired by the real-life story of Maria Augusta Von Trapp.

Goodreads’ summary of Von Trapp’s memoir says, “Baroness Maria Augusta Trapp tells in her own beautiful, simple words the extraordinary story of her romance with the baron, their escape from Nazi-occupied Austria, and their life in America.”

The biggest difference is that the father in the film was much worse than the actual father who was actually very loving and kind. That’s not the only difference though; the National Archives delved deeper into the similarities and differences between the memoir and film.

A personal favorite, this film has it all: great music, an amazing cast, and the legendary story of life in the early 1970s rock and roll era.

The film is based on the life of writer and director Cameron Crowe, who, as a teenager, wrote for the legendary Rolling Stone magazine. His mother was just like Francis McDormand’s character as well, but he proved to be too good a writer and was allowed on tour with The Who (where they almost had a plane crash as well).

Several key moments of the film are based on real-life experiences from actual famous musicians—for instance, when Russell Hammond (played by Billy Crudup) proclaims he is a “Golden God,” that was taken from Led Zeppelin frontman Robert Plant screaming that off a hotel balcony on Los Angeles’ Sunset Strip.

While this 2004 film may not have been in Tom Hanks’ top 10 list, it has a very interesting true story behind it. Hanks plays an immigrant traveling to America who is detained without documentation as a stateless person and therefore not allowed to leave the airport or board any other flights.

The true story tells the tale of Iranian-born Mehran Karimi Nasseria who spent over 15 years trapped in Paris’ Charles de Gaulle Airport. He left Iran to study in England, and on a visit back to Iran, was detained and jailed for his political activism. He was then expelled out of Iran, so he flew to Paris but was mugged outside the airport. He was able to fly to London but because he was without his documents, they sent him back to Paris.

He arrived in Paris and couldn’t go back to Iran, and had no other documents so was stuck in the airport as a stateless person for over 15 years. DreamWorks reportedly paid Nasseria around $250,000 for the rights to his story.

This is one of the best courtroom dramas of all time, written by one of the best screenwriters of all time, Aaron Sorkin. If you haven’t seen this film, do yourself a favor and check it out. Tom Cruise and Jack Nicholson go head-to-head in a story that Sorkin actually got from his sister, who was a lawyer working with the military at Guantanamo Bay.

She called him with the story about the people she was defending: a couple Marines who almost killed another Marine during a hazing incident ordered by their superior officer. Sorkin wrote the story on cocktail napkins while he was bartending in New York City and turned it into a play, which then got picked up for a feature film. The rest, as they say, is history.

Patch Adams is an amazing movie, but also one of the saddest around. Despite the fact it was panned critically, you should still have tissues ready any time you’re going to watch it—you’ll sad cry and happy cry.

It might be quite a surprise, though, that Patch Adams is an actual doctor and comedian who wrote the book, Gesundheit!: Good Health is a Laughing Matter, and started the Gesundheit Institute in 1971. His name is Hunter Doherty “Patch” Adams, and he really does organize a yearly trip for doctors to dress as clowns and visit hospitals around the world.

However, he didn’t love the film and said it was not an accurate representation of his beliefs because the film was so commercialized; plus, out of all the aspects of his life and activism, the film portrayed him merely as a funny doctor. Plus, he was a little upset that Robin Williams made over $20 million for the film but didn’t donate any of that to Adams’ free health care institution.

This true story is based off a book from MIT students who were able to count cards and figure out a way to bring down Vegas casinos by playing blackjack. Ben Mezrich wrote the book Bringing Down the House, and while no one knows for sure how much is true and how much is fictionalized, there have been several reports that a group like this did in fact exist and took millions from Vegas casinos.

Mezrich has pointed out the irony of filming in actual Vegas casinos for scenes based off the true-life account where they were counting cards and essentially stealing money, in these very locations.

Will Reiser wrote the screenplay for 50/50 when his real life friend, Seth Rogen, encouraged him as they worked together in Hollywood.

Rogen said in an interview with Yahoo, “We became friends, and then I think it was like six or seven months after we stopped working on the show, he told us he had cancer… and we really did not deal with it well.”

The movie explores the comedy and drama that occur when two twenty-somethings have to deal with a very real life situation. Rogen went on to say that the two friends always talked about doing something with the story as it was happening, but never got serious about it until Reiser beat cancer and was in better health.