How This Melted Rubber Duck Is Inspiring Conspiracy Theories Across Twitter 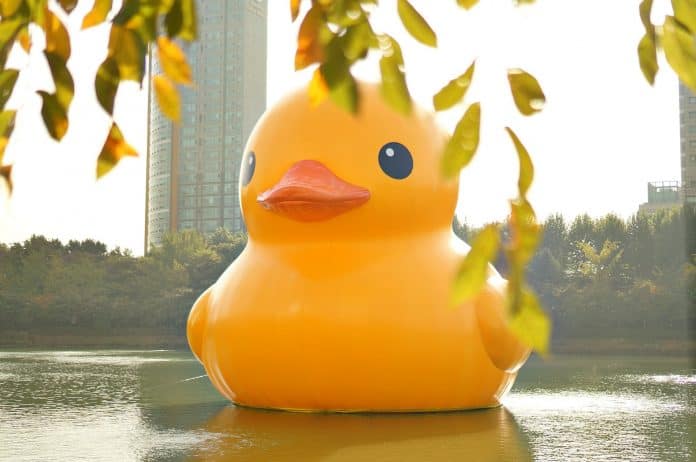 How hot is it?

Hot enough to melt a dashboard duck. Or not, depending on which side you’re on. It’s complicated.

Japan has been suffering a heat wave over the past few weeks, and one Twitter user claims that the punishing heat melted the toy duck on his car’s dashboard.

The man, who goes by the Twitter handle “shiohitoshi,” posted the pictures of the cute green duck on July 18, accompanied by a comment that roughly translates to “This is the worst, I can’t believe it.” In the second picture, the duck has evaporated into duck soup.

It’s kind of a big deal in Japan—but some people believe that it’s a fraud.

We can sort of see why, too. The car dashboards appear to be different, and the duck’s color clearly isn’t the same. Plus, the duck’s beak and eyes somehow stay towards the top of the blob, which seems a little convenient.

Then again, shiohitoshi clearly took the photographs in different lighting, which would explain the changing colors, and stranger things have happened. We’ve all got a somewhat funny picture of a melted duck, so who cares, right?

Twitter users quickly began marking up the photos, showing apparent discrepancies. Some people seem to care a little too much, but hey, they can’t just let someone on the internet.

Shiohitoshi was not without his defenders. Someone even drew out the rest of the dashboard to prove that the photos were taken in the same vehicle, but others still argued about the physics and the chemical composition of the toy.

Soon, bloggers got involved. Auto blog Jalopnik posted a few lighthearted memes but then determined that the car is a Honda; that model does have a dashboard resembling the one in both pictures.

Yes, he spends the entire video defending himself, but don’t look . You wanted this to happen.

So, is this real, or did a Twitter user just melt an innocent dashboard duck for our amusement?

Currently, all the evidence seems to point in favor. There’s no reason to believe that he’s part of a vast anti-duck conspiracy.

Still, we’d argue that the real takeaway is this: The internet will argue about absolutely anything, including whether or not a cheap dashboard toy can melt on a hot day.

And while the arguments were pretty fun to read, they obscure the real tragedy at the heart of this story. RIP, Dashboard Duck. We hardly knew ye.