Halloween Started As, Like, 5 Different Holidays. Here’s The History. 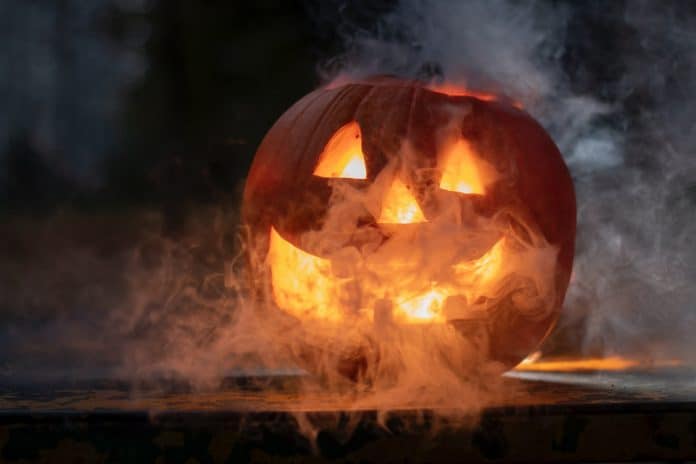 Ever wonder why Halloween exists? Sure, it’s a great excuse to get rid of those massive three-year-old bags of candy you stole from the convenience store (just us?), but it’s kind of strange that our entire country dresses up, hits the streets, and begs for treats. We’re not against it, exactly — Halloween’s the one day of the year when we can wear our cat leotard and Steve Buscemi mask without judgment — but we did wonder how Halloween became the modern holiday.

Current celebrations of Halloween typically involve costumes, bonfires, candy, and some scary decorations. These aspects of the holiday haven’t changed much since the holiday was introduced…but along the way, we lost a bunch of the strange traditions that characterized Hallow’s Eve.

Halloween was originally a celebration of the end of summer.

Started by ancient Celts over 2,000 years ago, Halloween started as a night to celebrate the end of summer and to usher in the harvest. This festival, known as Samhain (pronounced “sow-win,” like what you’d yell if your pig won the roller derby), was the most important of the fire festivals. It marked the start of their new year (November 1), and unlike modern Fyre Festivals, Ja Rule was not involved. Not directly, anyway.

During Samhain, people would allow their hearth fires to completely burn out while the harvest was gathered. After the work was done, Druid priests would light a giant community fire while residents would come dressed in costumes and make sacrifices to the pagan gods. Sound familiar?

Once the festival was over, people would take a flame from the communal fire back to their home and reignite their hearth. They believed the flames from the communal fire would protect them through the coming winter. Oh, they also gave out full-sized Snickers and threw toilet paper at their stuck-up neighbors (Editor’s note: No, they didn’t).

According to legend, Halloween allowed spirits to cross over.

The Celts believed that during Samhain the barrier between the living and spirit world was at its thinnest. It is said that ghosts would return to the living realm during this time to cause trouble and participate in some generally nefarious ghost business — damaging crops, causing issues with farm animals, rigging voting machines, and so on. Ghosts weren’t exactly evil, but they were annoying as all hell (pun intended). They floated around being spooky and annoying, but they didn’t directly attack people.

There were good components to the spirits’ presence, too: The Celts thought that Halloween made it easier to predict the future. Druid and Celtic leaders would have more access to the spirit world, and therefore could foresee potential obstacles or read someone’s fortune. We’d like that belief to make a comeback, so we’re going to try to predict the future right now: The Presidential election will be slightly complicated. Spoooooky!

Eventually, Halloween evolved into the holiday we now know.

By 43 A.D the Romans had conquered most of the areas occupied by the Celts, and if there’s one thing that Romans loved, it was taking other cultures’ cool holidays for themselves (they also loved togas, we think). Over the next couple hundred years Roman holidays would become intertwined with the original Celtic Samhain festival. Samhain was combined with Feralia, a holiday for honoring the dead, and another holiday celebrating Pomona, the goddess of fruit and trees. The celebration of Pomona is probably how bobbing for apples became a Halloween tradition.

The next major shift came in 609 A.D., when Pope Boniface IV dedicated May 13th as All Martyrs’ Day for the Western world. Historians believe that this was an attempt to erase any and all non-Christian celebrations. He later expanded the day to include all saints, changed the name to All Saints’ Day, and moved the date to November 1.

By 1000 A.D. the church added All Souls’ Day to be celebrated on November 2nd as a day to honor the dead. Huge bonfires were made, there would be parades, and people would dress as saint, angels, and devils. We’re assuming that some people would just put the name of a saint on a nametag and stick it on their shirt, because lazy people have always existed.

All Saints’ Day would also be called All-hallows or All-hallowmas, from its Middle English name Alholowmesse. In the Celtic areas, the night before Alholowmesse was called All-Hallows Eve, which ultimately evolved into Halloween.

Halloween made its way to America.

If there’s one thing that Americans love, it’s taking over other cultures’ cool holidays for ourselves (we also love togas). Pagan practices were never fully eradicated from either All Saints’ or All Souls’ Day celebrations, and when Irish immigrants settled in areas across the United States, these celebratory practices were introduced. By the late 19th century, Halloween festivities were common throughout the country.

Americans put their own spin on the holiday, as we tend to do with everything. Trick-or-treating probably came from the Irish and Scottish traditions of dressing up in costumes and going door-to-door, singing songs for the dead on the nights preceding Samhain. Sweet treats would then be given as gifts to the singers.

Secular Halloween celebrations gained popularity through the 1950s, and now Americans spend around $8 billion each year on decorations, candy, and costumes. We also introduced the “Monster Mash,” universally regarded as the greatest holiday song ever written. Today, Halloween is largely associated with the United States, and the holiday’s pagan traditions are mostly forgotten. That’s to be expected — nearly every one of our major holidays can be traced back to another culture’s holiday or festival, apart from Independence Day (because duh) and Thanksgiving (because double duh).

Now that you know the not-so-terrible history of Halloween, we hope you’ll find fun ways to celebrate it in unprecedented times. We recommend locking yourself in a closet while wearing a Steve Buscemi mask and stuffing your face with three-year-old candy bars. It’s what we’ve done for the past several years, and in our opinion, it’s a fine tradition.

Previous articleThis App Tells You Which McDonald’s Ice Cream Machines Are Working
Next articleThe Madonna Inn Looks Amazing From The Outside. Wait Until You See The Rooms.