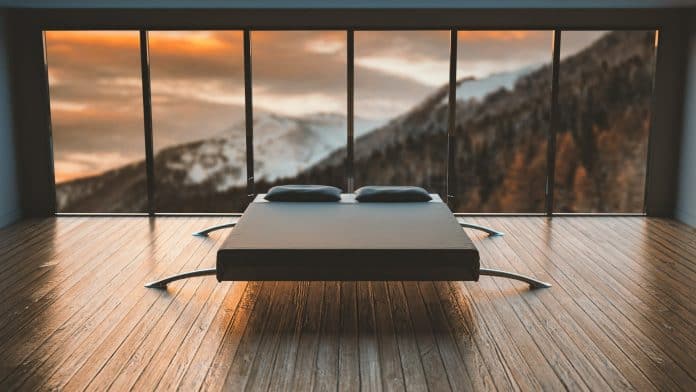 In 2018, a strange conspiracy began to spread on the dark corners of Reddit, spurred in part by this post from user Crazy_Potatos.

“Mattress firm [sic] is some sort of giant money laundering scheme,” they wrote. “They are f***ing everywhere and always empty. I remember seeing 4 mattress firms all on each corner of an intersection once, there is no way there is such a demand for mattresses.”

Other users chimed in, noting that Mattress Firms were absolutely everywhere — sometimes less than a mile from one another. People don’t buy mattresses very often; the Sleep Foundation recommends switching out mattresses every 6-8 years, noting that many consumers hang on to their purchases for much, much longer. What was Mattress Firm doing? And what about all the other mattress stores? How do they stay in business?

Pretty soon, people weren’t just talking about Mattress Firm — they were talking about every mattress store, and a theory formed: These mattress companies were running some sort of international money laundering operation. There couldn’t be another explanation.

Except, of course, that there was another explanation, albeit a much less interesting and satisfying one.

We know that because Mattress Firm filed for Chapter 11 bankruptcy, which it emerged from quickly in Nov., 2018. The company had poured money into branding over the previous decades, taking over many of its competitors and opening new locations nationwide.

In 2014, online mattress retailers emerged, taking a huge bite out of Mattress Firm’s market share. The company couldn’t adapt quickly, as it relied on brick-and-mortar locations to shore up its bottom line, and many of those locations had costly leases. Mattress Firm also alleged that two former employees were getting kickbacks for signing those leases, which were much more expensive than necessary (those employees strongly denied the claims).

That might help to explain why some Mattress Firms were located within miles of one another. The company simply made bad calls — and encountered some alleged corporate fraud along the way.

But in 2016, a South African retail company called Steinhoff purchased Mattress Firm for $3.8 billion, more than twice the latter company’s market price. Was this evidence of money laundering?

No, probably not. Steinhoff was trying to get into the North American market and may have simply made a bad deal. And while Steinhoff had been under investigation for alleged financial fraud, the company wasn’t specifically accused of money laundering, and there’s no evidence whatsoever that Mattress Firm was involved in the alleged illegal acts. When reached for comment, a representative for the company told NPR that “I can tell you with certainty that Mattress Firm is not a money-laundering front. We are, however, obsessed with finding customers the best bed at the best value.”

In any case, Mattress Firm went bankrupt two years later — if you’re running some sort of illegal operation, the last thing you want to do is open your books, so we can say with a high degree of confidence that Mattress Firm is legit. If there’s money laundering going on here, it’s unthinkably sloppy and expensive.

Mattress stores are fairly common because mattresses are big purchases.

The conspiracy theorists are partially right; there shouldn’t have been so many brick-and-mortar mattress stores, and that’s what got Mattress Firm into trouble (as we noted, Mattress Firm has emerged from bankruptcy and seemed to be doing well, but they announced in April 2020 that they would not be paying some or all of their rent for their stores as a result of the pandemic).

But mattresses are expensive, and while they’re not a common purchase, a single sale can easily make up for the high operating costs of a brick-and-mortar store. New mattresses can cost upwards of $5,000, though most cost between $200 and $1,500. That’s a high price to pay for a good night’s sleep — but as the old adage goes, “it’s smart to spend money on things that separate you from the ground.”

And while many consumers don’t mind buying mattresses online, others prefer to visit a real shop where they can try out a few options. Mattresses are “grudge purchases” — they’re important, we need them, and we want the best option possible, but we hate spending the money. Brick-and-mortar stores address a real need, and branding is particularly important for them. When their customers finally decide to buy a mattress, they’re likely to head into the first store they see, and if there are two Mattress Firms on one corner, that’s probably where the prospective customer is headed.

So, no, mattress stores aren’t a front for some shady money-laundering organization, though the economics of mattress sales are fairly complicated. Hopefully, that news will help the internet sleep a little easier.