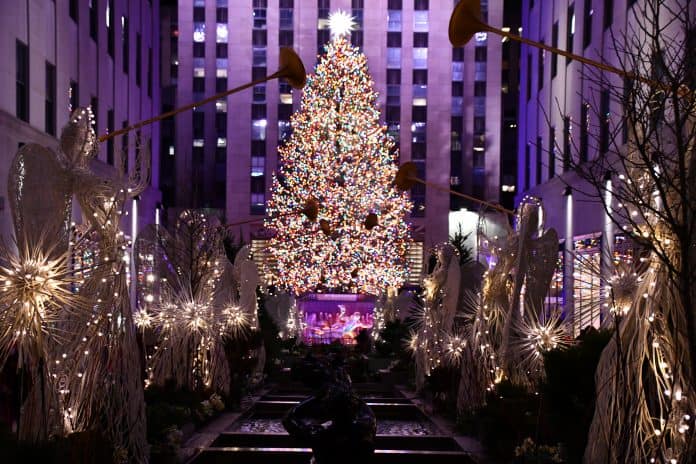 The Rockefeller Center Christmas celebrations have been happening since the 1930s. Each year a giant, lush tree is cut down brutally, at which point we cover its carcass in garlands and ornaments to symbolize…uh, something. The lighting of this stunning tree has become an integral American tradition—but 2020 had different plans, since 2020 is like a year-long visit from the Cat in the Hat (we would have said the Grinch, as it makes more thematic sense, but let’s be real, the Cat in the Hat was a way bigger jerk than the Grinch).

This year’s 75-foot Norway spruce is a patchy, floppy mess, which seems appropriate for 2020.URBO reached out to the tree and arranged a quick interview to see how they were doing.

This interview has been edited for length and clarity.

URBO: Thanks so much for taking the time to talk with us.

TREE: Yeah, no problem. No one has really taken the time to reach out for my opinion on this situation. I find that personally offensive and demeaning.

URBO: Sorry to hear that. Could you give us a quick explanation of how you got here?

thank you to our friends at four seasons total landscaping for this year’s rockefeller center christmas tree pic.twitter.com/SGAK3Np0M0

TREE: Sure. I mean, it’s supposed to be a big deal. Everyone said it was such a huge compliment to be picked as the Rockefeller tree. I guess initially I was excited. I was looking forward to going to New York. I’ve heard good things about the pizza?

TREE: No, but we like the smell. It’s certainly better than breathing in owl farts all day.

URBO: What happened during the trip? Is that when things started to fall apart?

TREE: I guess so. I mean, I’m a huge tree! They assured me they’d done this dozens of times and that I had nothing to worry about. They really wrapped me up meticulously, but once we were on the road, something didn’t feel right.

URBO: Did anyone check in on you during the trip?

TREE: No, but I didn’t think it was necessary. It wasn’t until I was in the city did I realize how bad things had gotten. I mean, I don’t like to brag, but my needles are…well, big. Thick. Luscious. Beautiful. And when I started to feel the wind on my trunk, I was like, oh hell no. They didn’t just do this.

URBO: We heard you had a little stowaway, too.

TREE: Oh yes, the owl. He’d be living in me for a while before this whole ordeal. He’s a good guy. A little weird. Kept smoking, which is, like, a major faux pas in the tree world. But I didn’t say anything about it, cause I was afraid he’d launch into another one of his stories about the time he was a roadie for Styx.

URBO: We actually spoke with him about all that. Well, not Styx. What was it like when they, uh, unraveled you in Rockefeller Center?

TREE: Look, I’m from Oneonta. I’ve heard about the Big Apple all my life, so I was ready for the show. First thing I noticed, though: No apple trees. What’s with that?

URBO: Oh, the Big Apple is a metaphor.

TREE: More like false advertising. Us pines, we sort of have a…how do I put this delicately…erotic fascination with apple trees.

TREE: I could have put that differently. Anyway, I was disappointed at first, but when I realized that I was missing more needles than a demented seamstress, I was sort of thankful. Don’t want the ladies to see me like this.

URBO: I just realized that I assumed you were a girl.

TREE: Dude, I’m a tree. Call me whatever you want.

URBO: So your preferred pronoun is…

URBO: Did people start commenting on your appearance right away?

TREE: Yeah, and they can all lick my bark. I mean, I know I didn’t look great, but give me a break! I spent almost 200 miles on the road wrapped in all sorts of stuff with an angry owl talking about “Mr. Roboto.” Let’s see how good you’d look in the same circumstances.

URBO: Are you feeling any better or settling in more at the center?

i visited the horrific rockefeller christmas tree so you didn’t have to.

they just put a sh*t ton of scaffolding around it to put the lights on it, but you can see all the branches that fell off in the second pic & how sparse it is in the last pic pic.twitter.com/WirncN5IN2

TREE: I am a bit. People are still callin’ me the “Charlie Brown Christmas Tree” or saying that I’m a visual representation of how sh*tty 2020 has been. It’s difficult not to take that personally. Also, I’m not sure what a Charlie Brown is. I assume it’s some sort of a bear.

I looked pretty awesome in the forest, man. That’s all I’m gonna say. Maybe don’t hire some random hillbillies with a flatbed next time.

URBO: I’m not doubting you there. You looked pretty sexy for a tree.

TREE: That makes me deeply uncomfortable.

TREE: *long pause* Look, do you want to get a drink or something?

URBO: Sure. There’s a really great bar a few blocks from here, but it’s shut down right now.

TREE: Well, see if they have a hose and just spray my roots for a while.

URBO: I have never been so in love.

[At press time, the tree was not returning our reporter’s calls.]

6 Best Movies To Watch On Thanksgiving

Don't know what to watch on Thanksgiving? Here are the top 6 movies you can binge while simultaneously eating too much mashed potatoes.
Read

6 Best Movies To Watch On Thanksgiving

Don't know what to watch on Thanksgiving? Here are the top 6 movies you can binge while simultaneously eating too much mashed potatoes.
Advertisment